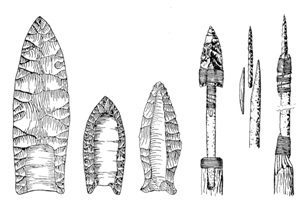 “Paleo” is a short form of Paleolithic. Archaeologists and anthropologists use it to refer to a period when humans used the earliest stone tools. It began about two million years ago, and ended at different times in different parts of the world, as people invented more kinds of tools and technology.

In the exhibit you can see different kinds of stone tools used by people here in the southern Appalachians: knives, scrapers, awls, and flint knapping tools. The finely worked spear points that you see from this time period are made from different kinds of stone and generally referred to as “Paleo points.” You can also see a mastodon vertebrae that has been worked by stone tools.

Flint knapping required an understanding of force and fracture and was a skill taught at an early age.  A skilled knapper could manufacture a projectile point in a matter of minutes, as well as produce specialized tools for shredding, scraping, engraving, or drilling.