Today Cherokee people remain on part of their original homeland in the southern Appalachians. About 1,000 Cherokee people stayed after Removal.  From 1839-1889 they worked and bought back their own land.  In 1868 the federal government recognized them and the Cherokee Nation in Oklahoma.  In 1889 North Carolina gave the 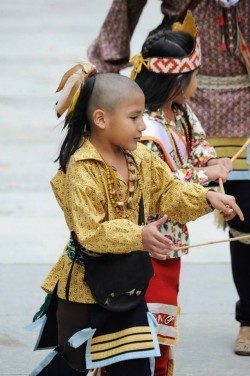 m legal status as a corporation.  From 1893-1948 Cherokee children were forced to attend boarding schools.   In 1930 Eastern Cherokees officially became U.S. citizens.  In 1997 they began buying back sacred sites including the Kituhwa Mound and mother town site, Cowee Mound and Hall Mountain Forest, and most recently the Tallulah Mound.

About 15,000 people are now members of the Eastern Band of Cherokee Indians.  About 9,000 of them live on tribal land, about 60,000 acres in Jackson, Swain, Graham, Macon, and Cherokee counties.  They operate their own schools, police and justice departments, hospital and health services.  They are still here.