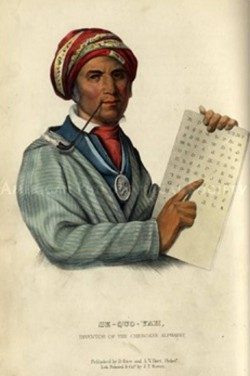 Between 1789 and 1839, the Cherokee Nation became “civilized” by European standards.  They developed a system of writing and printing.  Their government had a written constitution and operated with executive, legislative, and judicial branches.  At New Echota, Georgia, they built a modern capitol.  Cherokee men were farmers, blacksmiths, ferry operators, traders, diplomats, and writers as well as hunters and warriors.  Cherokee women were gardeners, potters, weavers, basket makers, and more.  Schools operated by missionaries taught Cherokee children to read and write English.  About 10 percent of the nation became Christian, while others maintained their traditional religion and ceremonies.